Mixing Piano, strings & guitar with textural loops, Slow Dissolve evokes soundtracks to movies yet to be scripted, first kisses yet to be dared kissed & all the heartbreaks that will inevitably follow - with a blend of piano, violin, guitar & sonic textures their sound has been said to recall Australian forebears such as The Necks & Dirty Three through a prism of influence from the works of Brian Eno, Yann Tiersen, and Gusavo Santaolalla.?


Their self-titled debut album is out now through Bandcamp, Hawk Moth Records, and was released in Japan through Salvaged Tapes Records.

Slow Dissolve的视频Slow Dissolve - 'Only The Dead Have Seen The End Of War' - Live at Meeniyan Town ... 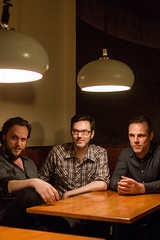