Influenced by Chinese culture and minimalist music, Zhang has created music of a unique voice and personality in an array of styles and genres, including orchestral, chamber, choral music. Among his representative works there are “Peddle Songs I-III” and “Divertimento I-III” for Chamber Ensemble, Violin Concerto “Chinese Knot”, “Call from the Shangri-La” and “Eight Views of Xiaoxiang” for Mixed Choir,“Zu Rate” for Chamber Ensemble, “Three Short Études” for Saxophone Trio, String Quartet “Exploration on the Combinatorial Theory of Architectural Space”, “Interlude on a Theme by Paganini” for Flute Quartet or Solo Flute, “Waves” for Orchestra, etc.

Zhang started learning piano at the age of five, and made his first foray into composition two years later. At 18, he began to study composition with Prof. Cao Jiayun in Shenyang, and later travelled to Beijing to study with the renowned composer Xu Zhenmin. In 2007, he entered Shanghai Conservatory of Music(BA), thus embarking on studies under Professors Zhao Guang, Zhu Shirui and Wen Deqing. In 2016, he was accepted as a post-graduate student in the same department, with Professor Wen Deqing as his advisor. Now Zhang is a visiting student of University of Missouri - Kansas City(UMKC Conservatory).
推荐 14人 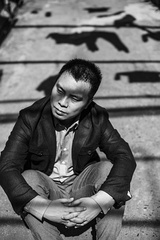